Get fresh music recommendations delivered to your inbox every Friday.
We've updated our Terms of Use. You can review the changes here.

After the Rain : A Night for Coltrane 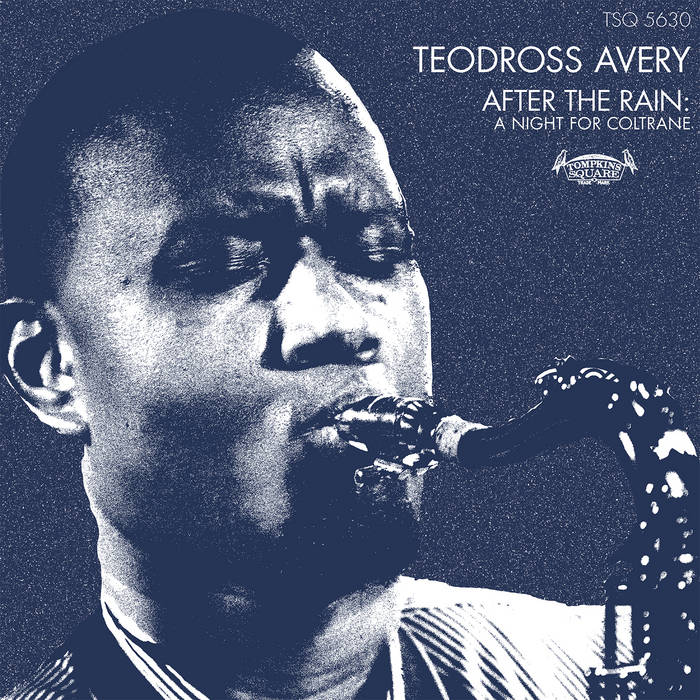 little_pako I love Coltrane, this album, this artist literally gave me goosebumps from beginning track to end. Purchased right away, no questions asked. The flow, the jam, the energy, the spirit. This album has it all.

"Expansive takes on classics such as "Africa" and "Pursuance" while beautifully sounding most like himself" - Chris Barton, LA Times

“It’s a privilege to hear someone dig so deep into Coltrane” – All About Jazz (4.5/5 stars)

“The album pays fitting tribute to a giant” – Downbeat

In the beginning there was John Coltrane. Growing up in a family that listened to a vast and global array of music, Teodross Avery experienced an epiphany at 13 when he first heard Trane’s epochal harmonic steeplechase “Giant Steps.” Taking up the tenor saxophone, he emerged in the mid-1990s as one of the most powerful young voices on the scene, with two critically hailed releases for GRP/Impulse! Avery’s long and productive journey has taken him down many musical paths, from gigs with jazz legends and hip hop stars to sessions with NEA Jazz Masters and platinum pop albums. With his Tompkins Square label debut After The Rain: A Night for Coltrane, Avery has found his way back home, reasserting himself as a supremely eloquent exponent of the post-Trane jazz continuum. Recorded live at Oakland’s Sound Room, the album is slated for release on May 10, 2019.

“It is a return to my roots,” says Avery, 45, who possesses a huge, brawny tone and a capacious harmonic imagination. “Listening to Trane’s music was my foundation, and this album is definitely a reintroduction to this area of my career. I’ve been busy with a lot of other stuff, but I was always playing acoustic jazz with top level cats. I wasn’t putting out albums. I was on record dates, but not my own albums. This was the perfect opportunity to make my own statement.”

He found an ideal outlet with Tompkins Square. Over its 13 years, the label has released new and reissued recordings by renowned jazz masters such as Calvin Keys, Charles Gayle, Ran Blake, Terry Waldo, Bern Nix, and Giuseppi Logan. The label recently releasedThe 1960 Time Sessions by the Sonny Clark Trio featuring George Duvivier and Max Roach (2LP/2CD set), which received a Grammy Award nomination for Best Album Notes (Ben Ratliff). It was Tompkins Square’s eighth Grammy nomination, and the first for Mr. Ratliff, who also wrote the liner notes for After The Rain.

For the Sound Room concert Avery reconnected with some of the Bay Area’s most formidable improvisers, joining forces with pianist Adam Shulman, Oakland-reared, New York-based drummer Darrell Green, and bassist Jeff Chambers, who played on the Yoshi’s album release gig for his seminal 1996 hip-hop inflected album My Generation.

“I grew up hearing Jeff with Freddie Hubbard, Bobby Hutcherson, Ahmad Jamal and other heavyweight players,” Avery says. “He’s one of the greatest bassists around, but after he made the date at Yoshi’s we didn’t play together until about 2014. He was the logical choice, and so was Darrell, who I played with in the Bay Area and New York. I always love his feel. And I’ve played with Adam since the early 2000s when I did gigs with Marcus Shelby.”

With the highly cohesive band Avery delves deeply into Coltrane’s songbook, opening with a brightly burning run through “Blues Minor.” Maintaining a steady level of energy throughout the nine-minute sojourn, the quartet offers a master class in the power of a briskly swinging mid-tempo groove. The set’s longest piece, “Africa,” is also drawn from the classic 1961 album Africa/Brass, Coltrane’s debut release on Impulse! orchestrated by Eric Dolphy and McCoy Tyner. It’s an epic performance that builds to ecstatic heights and then simmers back down with Chambers’ eerie arco bass solo backed by Green’s clackety trap work.

Cal Massey’s Latin-tinged “Bakai” is a piece introduced on the 1957 Prestige album Coltrane, the saxophonist’s first session as a leader (an underrated composer, Massey is due for rediscovery). Opening unaccompanied, Avery hints at the sing-song theme with a series of smeary ascending figures. As the band joins, he’s off, pushing against Green’s deft cymbal work with some extra grit in his tone. Shulman, a sought after arranger and first-call Bay Area accompanist, takes a particularly graceful, soul-steeped solo.

“Coltrane was one of the first records I bought myself, and I’ve been listening to that album ever since,” Avery says. “I liked that 12/8 rhythm. It relates to my mom, with an Ethiopian rhythmic feel. It’s a song that almost no one’s recorded. I felt like it was time.”


Of all the music that Avery explores, Mongo Santamaria’s “Afro Blue” is the piece that Coltrane played most frequently. First released on 1964’s Live at Birdland (Impulse!), the tune also appears on several posthumously released live Trane albums (but interestingly a studio version has never surfaced). Like Coltrane, Avery trades his tenor sax for a soprano and also lays out quickly after stating the theme. The rhythm section steadily ramps up the momentum and when Avery rejoins he’s at full sprint. It’s a cathartic, impassioned performance that leaves no doubt about his prowess on the wily horn.

He follows the thunderous “Afro Blue” with a gorgeous rendition of Coltrane’s ballad “After the Rain.” Back on tenor, he caresses the melody, which unspools over Chambers rumbling bowed bass and Green’s shimmering cymbals. Quietly majestic, it practically begs for another ballad or two, but Avery gets back to burning. He closes the set with a blast of spiritual sustenance, offering an extended take on “Pursuance,” the third movement of Trane’s devotional masterwork A Love Supreme.

“I’ve studied all areas of his music,” Avery says. “I was just trying to take songs that were important to him and important to the real connoisseurs of his music. Africa/Brass was a really important album for him. ‘After the Rain’ isn’t his most popular ballad, but it’s a very beautiful piece and a brilliant composition.”

As Ben Ratliff writes in the album’s liner notes, the band approaches Coltrane’s music with reverence and freedom, revealing themselves in the act of interpreting iconic compositions. “The synthesis achieved here is the result of scholarship…But it is also the result of relaxing an academic mind-set, something that comes later in life—a little bit of forgetting what you’ve learned, or of finding meaning beyond the limited binary thinking of structure/no structure.”

Born July 2, 1973 in Fairfield, California, Avery grew up in Oakland and Vacaville, where he spent most of high school. Looking for more rigorous musical training he attended Berkeley High his senior year played in the school’s award-winning jazz band under director Charles Hamilton (a mentor for future jazz stars such as Joshua Redman, Dayna Stephens and Justin Brown). Wynton Marsalis recognized his oversized talent and purchased him a saxophone. Berklee College of Music made a similar judgment, giving him a full scholarship. At 19, he found another champion in eminent A&R executive Carl Griffin, who signed him to GRP/Impulse Records. His 1994 debut album In Other Words focused on his original compositions, and earned widespread critical praise. Sought out by stars like Aretha Franklin, Betty Carter and Ramsey Lewis, he soaked up head-turning bandstand experiences and still managed to finish college while on the road in 1995.

It’s hard to overstate the impression Avery made when he hit New York. Within a week of moving to the city in 1995 he was playing at the Blue Note with piano legend Cedar Walton’s sextet featuring trumpet great Art Farmer. Over the next few years, he performed and recorded with veteran jazz masters such as Hank Jones, Ben Riley, Harold Mabern, Bobby Watson and Dee Dee Bridgewater, while also working with rising stars like Cyrus Chestnut, Lewis Nash, Donald Harrison, and Roy Hargrove. With the manifesto-like My Generation, a guitar-centric session featuring John Scofield, Peter Bernstein, and Mark Whitfield on alternating tracks, Avery embraced his Ethiopian heritage and the protean power of hip hop (with Black Thought of The Roots rapping on the title track).

While Avery has kept a relatively low profile on the jazz scene over the past two decades, he’s never put down his horn. After touring internationally with Lauryn Hill in the late 1990s, he started recording prolifically as a session musician in New York City, contributing to hit albums by Amy Winehouse, G-Unit All Stars, Joss Stone, and Talib Kweli. Returning to academia, he completed a PhD in Jazz Studies from the University of Southern California in 2016, and is now assistant professor of Jazz Studies and Commercial Music at California State University Dominguez Hills in Los Angeles.

Avery started gaining attention again in straight ahead circles as part of a powerhouse tenor sax tandem with Howard Wiley on Hammond B-3 great Doug Carn’s 2015 album My Spirit (Doodlin' Records). He revealed a different side of his musical personality on 2017’s Post Modern Trap Music (Katalyst Entertainment), a duo collaboration with drum master Marvin “Bugalu” Smith, who has played with the likes of Archie Shepp, Sun Ra, and Chet Baker. In many ways, the project was a primal scream of freedom after years battened down in grad school.

“I had this sense I need to record an album and not be guided by piano and bass,” he says. “I needed to be in the driver’s seat as to where the harmony was going. It was like a release. When I was at USC, everything was very regimented. That’s part of the point of pursuing a doctorate. I needed to clear my intellectual palette.”

The saxophone/drums duo was pioneered of course by John Coltrane and Rashied Ali, and Post Modern Trap Music paved the way for After The Rain. A major addition to his slim but growing discography, the album catapults Avery back into jazz’s top ranks as a fierce and captivating improviser ready to reclaim his vaunted reputation.

Semiratruth joins the show to discuss their latest release, "loading..".